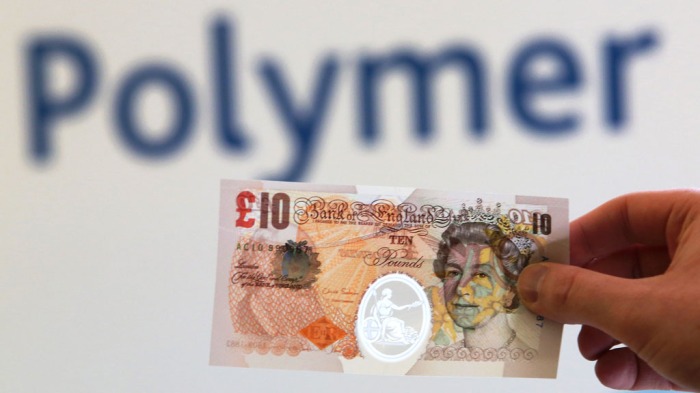 We are just 2 years away from money becoming plastic literally as the bank of England move from cotton paper notes to polymer (polypropylene) notes.

Like the 1st currency notes and coins, plastic has developed our time with new techniques to produce and create various plastic for different applications.

Currency is the system of money (monetary units) in common use, especially in a nation.

Currency evolved from two basic innovations, both of which had occurred by 2000 BC. Originally money was a form of receipt, representing grain stored in temple granaries in Sumer in ancient Mesopotamia, then Ancient Egypt.

In this first stage of currency, metals were used as symbols to represent value stored in the form of commodities. This formed the basis of trade in the Fertile Crescent for over 1500 years.

In Europe, paper money was first introduced on a regular basis in Sweden in 1661 because it was rich in copper making it of low value, extraordinarily big coins (often weighing several kilograms) had to be made.

The advantages of paper currency were numerous: it reduced the need to transport gold and silver, which was risky; it facilitated loans of gold or silver at interest, since the underlying specie (gold or silver) never left the possession of the lender until someone else redeemed the note; and it allowed a division of currency into credit and specie backed forms.

Bank notes and coins are no very much part of our lives yet digital currency is now present. There is no hand over of money at the end of the month for your wage just a page slip verifying your wage has gone into your bank account digitally.

It hasn’t stopped there with a new currency emerging called ‘Bitcoin’ which is 1st recognised digital only currency but physical representations of bitcoins; each of these coins can be broken open to reveal a piece of paper with the private key to a bitcoin wallet.

Why the switch to a plastic note??

The Bank argues that the polymer notes stay cleaner and are more secure than cotton paper notes, which have been used for more than 100 years.

Finally you can be rest assured that of you leave your money in pocket it can survive a spin in the washing machine.

The new banknotes will be made from a thin, transparent and flexible film made of polypropylene.

This is coated with an ink layer that enables it to carry the printed design features of a banknote. This allows the inclusion of windows or clear portions in the design, used to enhance protection against counterfeits.

The Bank has said that these notes last for 2.5 times longer than paper banknotes.

The new banknotes will cost 50% more to make, the BoE estimates they will save £100m ($157 million) in printing costs over a ten-year period, because they’ll be twice as durable as paper and should be able to survive, for example, an accidental visit to a washing machine. The bank estimates that it currently spends about £35-40 million a year on replacing notes in circulation.

More than 20 countries around the world have adopted polymer banknotes already so no need to worry if it’s not unproven tech.

What is a polypropylene?

Polypropylene (PP), also known as polypropene, is a thermoplastic polymer used in a wide variety of applications including packaging and labeling, textiles (e.g., ropes, thermal underwear and carpets), stationery, plastic parts and reusable containers of various types, laboratory equipment, loudspeakers, automotive components, and polymer banknotes. An addition polymer made from the monomer propylene, it is rugged and unusually resistant to many chemical solvents, bases and acids.